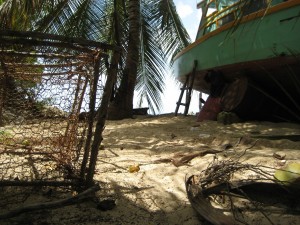 Beer on the beach

Although Barbados looks fairly small on a map, and before arriving we had plans of being able to walk from the west to the east coast in a couple of hours, the heat dictates that this is not a viable option.

Buses were a consideration, however, our brief experience of them is that they’re hot, sticky, overcrowded and erratically driven, therefore, we ‘copped out’ and hired a car for the day.

We headed north along the beautiful west coast, driving past enormous mansions and tiny shacks (chattels), the divide of wealth is stark.

First port of call was Speightstown which our trusty Lonely Planet described as “easily the most evocative small town on the island”, and they were right. It was lovely, bustling but not overcrowded with locals selling fruit and veg on the streets, the sea sparkling and plenty of friendly people. We tried to find ‘Eats Bar’ in search of rotis, a local dish which I’ve been trying to track down since arrival but still haven’t managed to sample yet. Unfortunately, it’s no longer called Eats and the lady there informed us that she was not cooking today…don’t believe everything you read:( 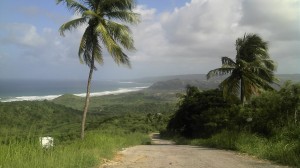 An on spec visit was made to Port St. Charles Marina; Robert, a helpful chap, showed us around, there were some beautiful yachts, we are just waiting to hear whether the prices are equally so.

After some ‘discussions’ about my map reading abilities, we headed for the east coast. The view down the coast from Cherry Tree Hill was stunning. It’s in total contrast to the picture paradise west coast. The coastline is rugged and the roar of the Atlantic booms, filling the air with a mist of sea water. Surfers come here but swimming is not advisable. 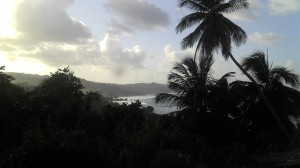 Later we drove to Oistins, 10 minutes east along the south coast from where we’re staying, where, every Friday night, a ‘fish festival’ is held. The fishermen cook their catch, mostly locals and some tourists enjoy the food, drink copiously and dance the night away. Even Jamie ate red snapper and appeared to enjoy it. 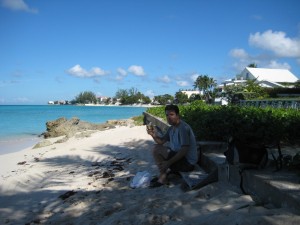 Breakfast on the beach

Our first morning and we were rudely awoken by the manic cries of a rooster. We got up early and had breakfast on the beach.

Walking to Bridgetown along the beach was a slow and steady affair. Firstly it is so very hot and humid, perhaps hurricane Ophelia building in the distance makes it more so.

Secondly, we kept having to stop to look at things along the way, oh, and swim. And what a glorious place to swim, it was hard to keep the grins of delight from our faces. 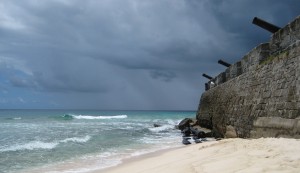 Bridgetown was a bustling hive of activity with an interesting mix of colonial architecture, Rastafaian culture and bureaucratic throwbacks (we ate lunch from the ‘butty’ van serving the ministry for data entry and statistics). 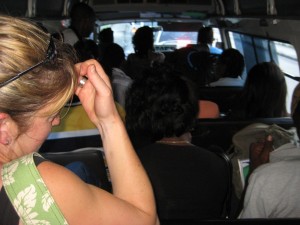 Catching the bus home after a long day walking was a daunting prospect having seen so many pass with limbs hanging from every window and Reggae music booming, however the other passengers were so friendly and accommodating that it made the journey an experience not to be missed. 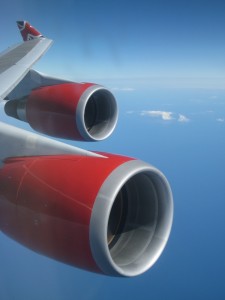 It’s exactly a week today since I worked my last day. What a stark contrast; at exactly this time last week I was getting onto my bike to cycle the steep ascent of Sharpe’s Hill, whilst mentally preparing myself to face a another miserable day teaching with a bunch of ungrateful brain-dead morons. And the only concern I have now is what to buy for breakfast, HURRAHH! 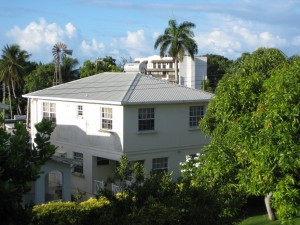 Life is too short, the journey begins…

The calm before the storm

These pages catalogue the ups and downs of our (Jamie & Rachel’s) quest to break the hum drum routine of everyday life, to get out there and see if the wider world has more to offer.

Our mission is to find a yacht big enough for two people to live on (and sometimes a couple of guests) without killing each other.

We would like to discover the wonderful hidden treasures of the world that are usually only known to locals, walk the countryside, mountains and jungles, find beautiful secluded bays and beaches while supporting ourselves with what work we can find along the way.

We are both extremely hard working, I am a software developer and Rachel is a proficient cook and a qualified teacher, once we have purchased the boat we will have our accommodation and transport, so as a minimum we need to find money for food.

We are under no illusion, we realise that the boat will cost money to maintain and anchoring every night (to avoid mooring costs) will not always be possible, but hopefully we will meet many interesting people along the way and encounter plenty of exciting potential to earn a good living.