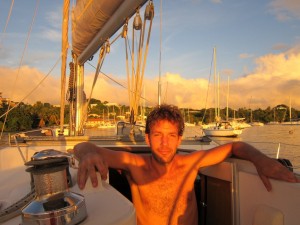 This our sixth evening aboard The Magic Badger, previously Rainbow Chaser, we just haven’t been able to tell anyone yet due to power and wi-fi issues. Our first day was spent cleaning out the bilges. For those of you who have never done this before I really can’t recommend it, however, as gruesome a task as it was, it was great to be finally doing something. 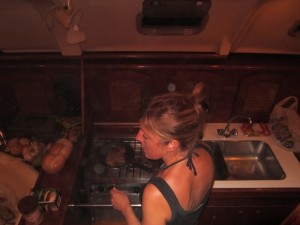 Hot in the kitchen

The first two evenings aboard I hardly slept due to the heaving, swaying and rocking of the boat but by the third night I managed a decent nights sleep. We’re moored in a relatively sheltered bay called Blue Lagoon on one of the Barefoot moorings, this is the charter company that we bought the boat from. 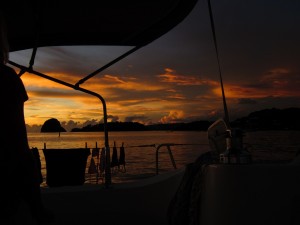 Every day since moving on has been spent doing jobs on the boat, she has quite a lot of work which needs doing and this will occupy us both for some time to come. I’ve spent the last two days sewing Velcro patches onto the salon cushions because the old stuff has started to come away and Jamie has been sorting out the wiring and batteries. We haven’t sailed her anywhere yet and neither of us can wait! The islands are there beckoning if only we didn’t have so much stuff to sort out. 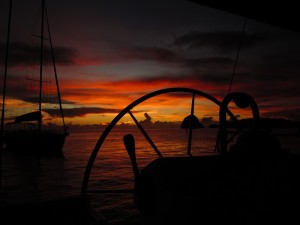 How about that for a sunset

Life has been a lot more enjoyable since moving into our new home. It’s wonderful being able to cook again and eating it out on the deck is a real treat. We both lay down on deck after dinner tonight and watched the stars which was magical and it makes it feel a bit like we’re camping but my nails are cleaner and I don’t have to wee behind a bush when I wake up in the middle of the night.

12 Responses to Afloat at last