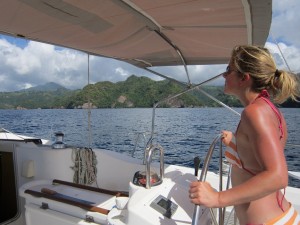 Finally, after weeks of fixing, sorting insurance and collecting tools and provisions we set sail. It seemed prudent to take her for a test run first rather than just sailing off into the sunset because, although we had sailed her briefly before buying, we wanted to double check, amongst other things, that the running rigging was up to the job. We took a sail north up the west coast of St.Vincent as far as Cumberland Bay, the next bay up from Wallilabou (where the film set for the Pirates of the Carribean was…still is in fact). The swells were pretty big in places and I’m ashamed to admit that I was pretty terrified as she leaned when the wind became strong. It’s been ten years since I sailed in the sea so it will take a bit of getting used to. The scenery was spectacular all the way, huge lush green mountains and craggy cliffs. We wanted to eat lunch in Wallibalou Bay but had been warned that should we choose to do so, we would be plagued by locals in little dinghies, some offering to help us moor and others just on the scrounge. Lo and behold, as we came alongside Wallibalou, a couple of kayaking locals paddled up and pestered us to sail into the bay. When we declined one just said “Can I have a cold beer?” We told him sorry, but no, we didn’t have one. (Utter lies I’m afraid but why would you? Cold beer is luxury on a yacht with no solar/wind power or generator). 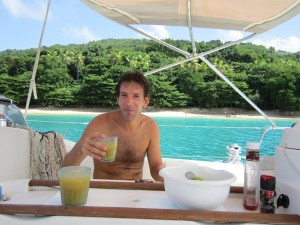 As we edged in to Cumberland Bay, the same thing happened again, a bloke on a dinghy asking if we wanted help. Even after we’d said ‘no thank you’ he loitered right next the boat. I felt annoyed, mainly because I was wearing only my bikini and felt exposed and self concious but because I was steering, I could hardly start yanking my clothes on! Jamie also got pretty pissed off but remained polite and after saying very firmly ‘no thank you’ he got the message, only to be replaced by yet another… We decided to moor around the corner in an isolated and idylic little bay where lunch was eaten, a bit of snorkelling done, then we sailed back, the last hour and a half in the dark. It was a good test run and highlighted a couple of small issues which we fixed the next morning. 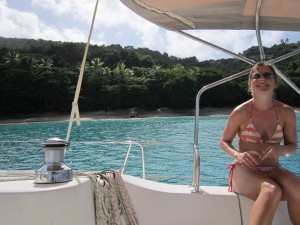 Once the jobs were fixed, food had been bought and we’d filled her two tanks with water we set off, this time ‘for real’. How exciting! It was quite late by this time, 15.30 to be precise, but it gave us enough daylight to sail to the first Grenadine of our trip, Bequia (pronounced beck-way). We moored up at 17.40 in a gorgeous place, Princess Margaret Bay just outside the main port of Port Elizabeth (the capital) in Admiralty Bay. And it is from here that I am now typing this. 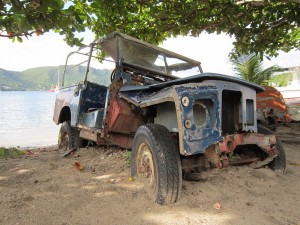 We spent yesterday chilling out (we’ve both got stinking colds) and we took the dinghy into Port Elizabeth, a lovely quaint little town, then did a bit more snorkelling despite the colds. Today has been spent fixing stuff. Tomorrow we hope to head out to our next Grenadine! I shall update you all on which one soon.