It’s been nearly three weeks since we arrived here in SVG and that is because we put an offer in on the boat with the naff name and we have been sorting out the ‘stuff you have to do before  buying a boat’ since. 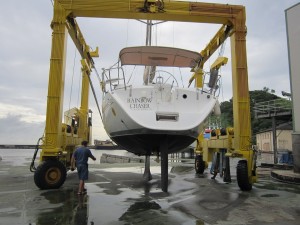 Once our offer had been accepted we had to arrange a marine survey with an Australian called Chris who flew in from St.Lucia. Once he’d looked inside and inspected all her bits and pieces, we all sailed to Ottley Hall (an hour north of here) to have her hauled out of the sea so that Chris could inspect her more closely. He tapped her all over with a hammer after which she was put back into the sea to sail back.  We had to wait a few days before Chris’s survey was revealed and then did a bit more negotiation with the owner as a result of this. It has been a fairly time consuming process during which we have been trying to occupy our time as best we can. 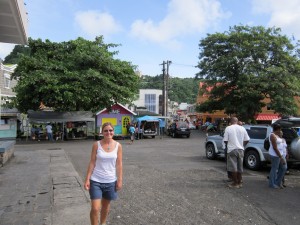 At first glimpse, the island looks like a hiking paradise, however, on closer inspection there is a severe lack of footpaths or pavements of any kind. There are trails in the north to climb the volcano La Soufrière but we have been warned by the locals that we should take a guide because tourists have been robbed in the past. We plan to climb her eventually but until we do, to get some exercise, we have been walking to the capital Kingstown. 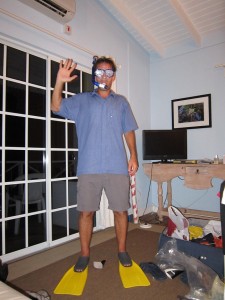 The walk is not a pleasant stroll, it is more of a sweaty march down a main road following a footpath which stops suddenly, and for no apparent reason, making it necessary to take our lives into our hands to cross St.Vincent’s equivalent of the M6 in order to regain it, all the while breathing in lung fulls of sooty black diesel fumes (they clearly don’t have an emissions test here). Our walks have mainly been driven by a search for simple produce such as lettuce and tomatoes, which, even in the big supermarkets, are not a guaranteed find. Jamie found some great snorkelling gear in a fishing shop though! 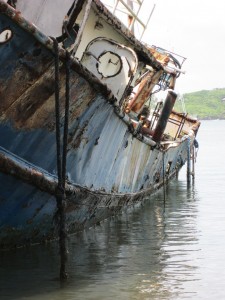 Rotten but not forgotten, the Carla Marina

There is a prettier and less dangerous walk that we sometimes take through what we’ve named the ‘boat graveyard’. Part of the shore  has several wrecks from past hurricanes and they just sit and rot looking forlorn and a little bit creepy. 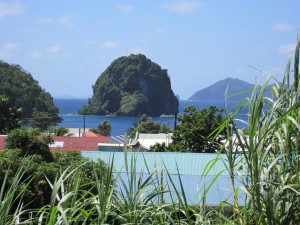 We hired sea kayaks for the day and rowed over to Fort Duvernette which was built on a volcanic plug in the bay sometime in the 1700’s by the British to ward off the Caribs and the French. It has been restored by the Finnish government (I’m not sure what the link is) and once the 250 plus steps have been climbed the top is bristling with impressive looking cannons. There’s even a little stone cottage hidden away where we had a sighting of our first wild iguana.