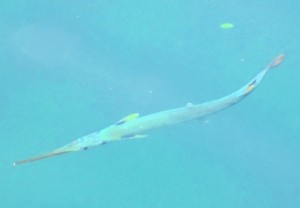 A month has passed and we have hardly moved from Chaguaramas and we have been busy, busy BUSY.

Diesel Turd introduced himself on the second day and has hung around ever since and is, contrary to his name, spectacularly beautiful. He has an iridescent purple, blue and green body, long snout (??) and googly eyes and a girlfriend that looks just like him. We christened him thus because he seems to thrive in water that is strewn with the afore-mentioned along with a whole tide of plastic nastiness.

Work on the boat has ceased only for a day and a half and that was to take a much needed trip away from the sweat, toil and tears last weekend. Prior to this trip we’ve  had a whole host of troubles which we have been slogging away at, trying to resolve. I shall try not to bore you too much.

These have been the major causes for concern so far:

1) Wi-fi –  with Jamie’s work and connections to home depending upon it it has been a major issue. After much investigation (walking around the few electrical suppliers and quizzing them thoroughly) we bought a ‘Bullet 2’ which is an aerial which enables us to have up to a 7 mile range for wi-fi. It seems to be working pretty well so far.

2) Batteries – ours were at the end of their life, and , after lots of price negotiation and information prising, we bought 4 Trojan golf cart batteries from Brian who certainly knew his onions when it came to marine power issues. 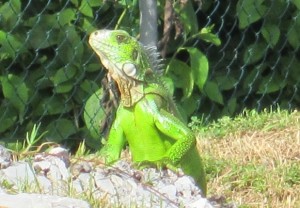 3) Rigging – ours was too old and had to be replaced for insurance purposes (they recommend replacement after 10 years, ours was 14 years old). There is currently only one decent rigger here now, a Swede called Jonas, and he was too busy and too expensive to fit ours before Christmas, however, Jamie was an eager student and slowly, piece by piece, he removed ours, took it to Jonas, got new bits made up and, armed with advice on how to fit it, replaced it all. This took a week, the worst of which was spent carrying the jib furler – a 46 foot length of metal cable – half a mile down the road. I think I can imagine how poor Jesus felt like on Maundy Thursday (or was it Good Friday?).

We managed to accomplish the rigging in Calypso Marine, a sheltered spot kindly lent to us by a bloke called Chicken via a wonderfully helpful Brian (of battery source). It was here that we realised that the shrieks we’d heard each morning and evening were made by grass green parrots and where we first spotted sunflower yellow and sky blue birds and iguanas grazing.

4) Bimini and stack pack –  ours need replacing however, after some pricing it seems that it will cost us approximately £1000 for a glorified piece of tent and a long tent bag. We are considering buying a sewing machine to try and avoid such excessive costs…

5) Trinidad is not cheap!!! – It has built a reputation over the last 15 years for being the place to come as a Caribbean cruiser to get work done. It has lots to offer but it is certainly not cheap, it just has more choice than the rest of the Caribbean. It has recently been accused, sitting comfortably with it’s Caribbean monopoly, of letting standards slip and prices rise. 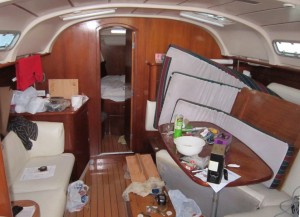 6) The headliner in our cabins is minging (that’s faux white leather wallpaper for those who have no idea what headliner is) and also needs replacing. I spent a day chiselling half of our bedroom cabin wall off. YUK. Dead cockroaches and glue that may as  well have been there for 100 years – the heat from the sun melds the glue with the foam backing and proves even worse than 1930’s wallpaper stuck to Victorian plaster to remove…a job still not finished.

7) Re-badging the Badger – this was completed today! It proved a messy and time consuming effort to remove poor old Rainbow Chaser.

8) Fishing boats – these are skiffs measuring 20 ft with 1000 HP engines stuck on the back. Why? Venezuela is temptingly near I fear. Cocaine smuggling pays much more than a few red snapper. Anyway, they zip past at 100 mph causing annoying and potentially dangerous waves. Nothing a bow mounted whaling harpoon wouldn’t resolve immediately. 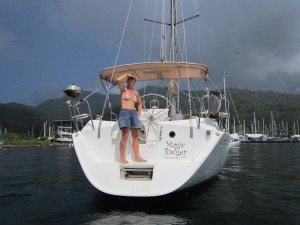 The Badger is born

9) Food – the contradiction. Trinidad is so unlike St. Vincent and the Grenadines. It has shopping malls the like of which I haven’t seen since visiting the Trafford Centre. It also sells Hagen Daz in every supermarket and there is an absolutely gorgeous cafe, within a stones throw from our mooring, serving iced coffees oozing with cream and ice cream (at least 1000 calories per serving) and heavenly cakes. These have been our undoing. I have troughed for the last 4 weeks making up for the lack of readily available nice food in the SVG. Unfortunately when Kate Moss said “Nothing tastes as good as skinny feels” she was clearly only referring to herself. The contradiction is the supermarket ‘Hi-Lo’ just around the corner from where our cafe is. Although it sells Hagen Daz the rest leaves a lot to be desired. Amongst the lows are bread that is canary yellow in colour and tastes of washing powder. Greasy tasteless cheddar that also tastes of washing powder. Tomatoes that, unless cooked, are revolting and staff that barely manage to conceal their contempt for their customers. We were served a few days ago by a girl who didn’t look at us once or say anything, just dragged our food through the scanner as if it was an effort that was totally beneath her and she paused every few items to take big mouthfuls of her lunch. Jamie and I couldn’t help but look at each other and giggle. I’m being unfair, it does sell lovely ripe papayas and excellent bananas. 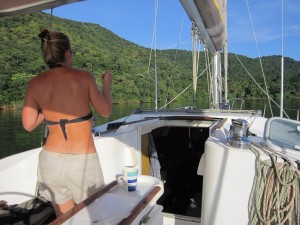 So, after all our work (I’ve missed lots of sanding and varnishing and screw cleaning out but didn’t want to make you sleep, however, Dad, all your training in matters of DIY has proved invaluable, thank you!) we thought we deserved a night away from the hustle of Chaguaramas and sailed (actually, motored with the jib flapping – no wind) to the island nearest here, Monos, to a bay called Grand Fond Bay but known locally as Turtle Bay. It was a beautifully tranquil spot, at least it would have been if there weren’t 7 or 8 gin palaces moored together in the middle while the rich white kid owners had a rave that lasted until 11pm. Anyhow, we didn’t let this spoil our fun and we dinghied ashore only to find that there was no beach, just a crust of plastic amongst the palm trees. It was horrible. We’d really been looking forward to a swim, then we saw all this litter and it put us off totally. Still, we thought we’d explore because our guide book said that there were tracks you could walk on. We followed an obvious one into the jungle and had only been walking for a minute when we were hailed by a man naked to the waist waving a machete in the air shouting “This is private property! Are you after my coconuts?” We froze, then said “Er, no, we’re just having a look around.” As soon as he saw us and heard our accents he stuffed his machete back into his scabbard and said more gently “I thought you were after my coconuts. Don’t be scared, it’s OK you can carry on” but we didn’t much fancy it after that so headed back.

The morning really was beautiful, the rave had gone and the bay was still and green with exotic bird sounds calling from the shore. We saw a turtle, a spotted ray (we found out later that this was a Leopard Ray) and a huge blue butterfly that was so big it looked like a bird that flew like a butterfly from a distance. After lunch and a swim (yes, we couldn’t resist and put the memory of the plastic tide to the back of our minds as we dipped in) we sailed back to Chaguaramas to continue the work.