It was all a bit of an anti-climax once Joe had left, our holiday was over, we had to sail up to St.Maarten, deposit our boat in a marina and fly back to Trinidad to resume work on CAP II. (The yacht we’d been working on previously). 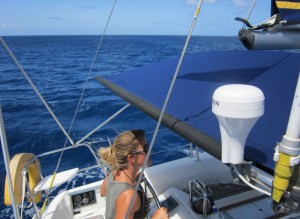 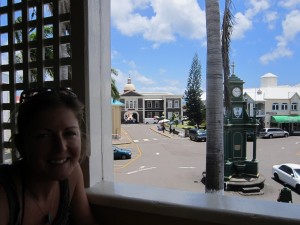 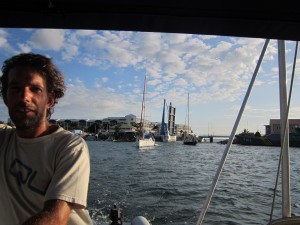 … A couple of days later we checked out of Antigua and sailed first light to St.Kitts which was a pleasant sail, even achieving up to 8 knots at times! We sailed through the channel between Kitts and Nevis, wondering if Nevis had been named so after it’s Scottish namesake, it looked to be a similar shape at least… We anchored in the small White House Bay just before sunset and sailed up the west coast the next morning to check in at Basseterre, the capital. It was quite a pretty and bustling little town and after provisioning and eating the most dismally disappointing lobster sandwich you can possibly imagine, we continued our sail up the coast and anchored off Sandy Point ready for an early start to St.Maarten the next morning… which paid off because we arrived in time for lunch after a lovely sail past Sint Eustatius, a small rocky island that was once the chief port of the entire Caribbean, hard to believe when you see how small it is, and Saba, a very steep and rocky island that is supposed to be lovely. We decided we’d love to visit both if we get the chance, but alas, on this occasion we hadn’t the time. 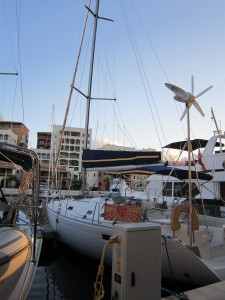 St. Maarten is an island owned by 2 countries, the north side is French and the south side is Dutch. There is a huge lagoon, Simpson Lagoon,  that you can access from both sides, however, if approaching from the south, it’s much easier to go in the Dutch side despite it being the most expensive option. We were leaving our boat in a marina in the lagoon and so had to anchor outside in the bay and wait until the bridge to the lagoon opened. At 17.30 we were ’rounded up’ by a guy from customs in a dingy and had to form a watery queue to pass under the bridge where we were then escorted by an employee of the marina for the surprisingly long journey through the lagoon to Cupecoy Marina. This was the first time we had had the ‘luxury’ of staying in a marina, and, after 2 nights of being viciously eaten by mosquitoes, we decided it would be our last! It was sad and a bit worrying to leave our faithful Badger in a marina all by herself while we flew off to Trinidad, however, this was the safest option and there are staff there who check on her bilges and batteries each week to make sure she’s still floating. 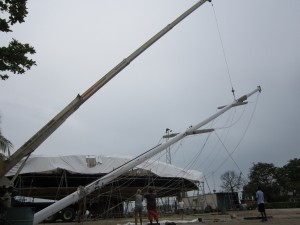 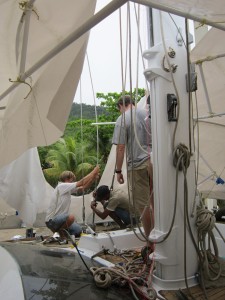 So here we are…AGAIN!!! In Trinidad, living in a house instead of a boat, working our backsides off along with the other crew to get CAP II seaworthy and back in the water ready for her imminent charter. She should ‘splash down’ by the end of this week (today is Monday the 14th May) and, after some sea trials and other inevitable tweaks, we shall be sailing her back up to St. Maarten, where we pause for a couple of days to buy some of the many things (like small light fittings) which are just not available here. Then, we plan to crew her over to Newport, New England. 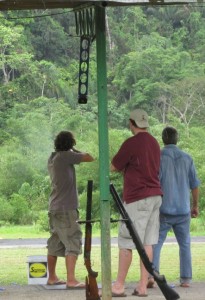 Day off - Trap and Skeet

A much needed and rare day out was had yesterday, Keith (the captain), Dina (his partner) Jamie and I drove up to the beautiful north east coast of Trinidad via Toco to Grande Riviere on the north coast. Grande Riviere is a famous breeding ground for leather back turtles and, despite realising that it was unlikely to see any beaching until after dark, we waited until dusk and saw loads of huge heads and bodies popping up out of the waves and even one who decided she’d start to get out before changing her mind and going back into the surf, presumably until it was darker when there are less predators around. Even though we were disappointed that we weren’t able to wait until dark to watch them properly, it was still magical to see what we did see and the scenery was so spectacularly beautiful we decided that it would be lovely to return one day and stay in the little hotel on the beach for a week to turtle watch and explore the area by hiking and kayaking. 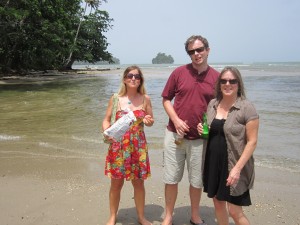 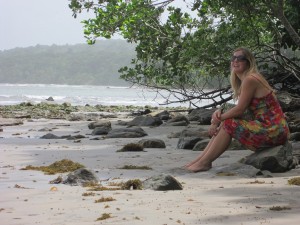 Rachel on the beach

2 Responses to Return to Hades