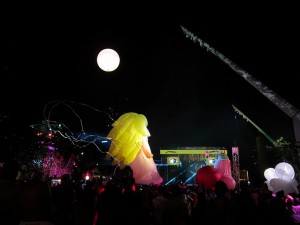 From Acadia we drove north east to Baxter State Park. We were surprised to find that Baxter park was quite heavily controlled by rangers and had a good few visitors, much more than we had anticipated. We found a lovely camping spot near a swamp just outside the park on our first evening and it was here that we had our first sighting of a moose as it ambled, noisily enough to wake us both, through our camp in the early hours. 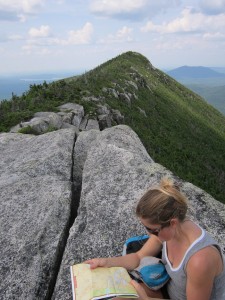 The next morning we hiked up ‘Double Top’ mountain which was a fairly strenuous climb with beautiful views across the lakes and mountains. It was a really hot day and at the end of the walk I decided to just jump in the lake at the bottom of the mountain (with all my clothes on because there were a few people around). A little girl at the side of the lake shouted to me, “There’s  leeches in there” but I ignored her imagining that her parents had told her that to keep her out. I plunged in, had a little swim, washed the mud off my legs and then joined Jamie on the bank, and the second I had stepped out I watched as a ‘tide’ of what I at first thought were black fish zoomed up, clearly searching for something (me) and then I realised to my disgust that they were leeches with red spots on their backs all slurping into different shapes, sniffing around the water where I’d been only seconds before. Urgh! The horror! It makes me shiver thinking of it now. Thank god they didn’t get  to me, you’d have heard my screams from Lancashire. 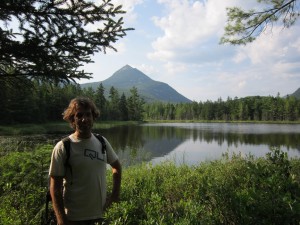 We camped in a park camp-site that night, there was no sneaking off to wild camp, the park was (disappointingly) too heavily policed by rangers. After a pleasant hike to some waterfalls in the morning we headed out of the park and north to Canada. 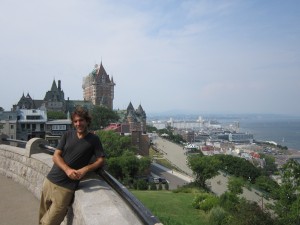 We reached Quebec fairly late but had luckily managed to book into a lovely B&B. The next day was spent exploring the very beautiful Quebec City. It was the last day of a big music festival and the streets were busy and the sun shone all day. We had a lovely time eating good food and indulging in some culture. They speak French here and the people are fiercely ‘Francophonic’ believing that this will help to preserve their cultural identity. We tried our best to communicate in our very basic French but most people just spoke English back at us! 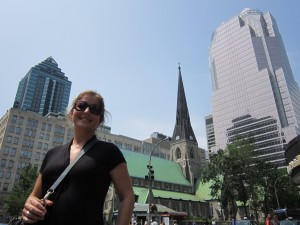 Montreal was a sleep inducing 2 hour drive away with a lunch stop at Trois Rivieres, a rather faded and impoverished looking place, not dissimilar to Morecambe… Montreal is big and busy with lots of stuff going on. After feasting upon dim sum in the Chinese Quarter we chanced upon live bands, comedy acts and dramatic performances and streets that were packed with people, all part of the comedy festival. It was an impressive introduction to ‘Canada’s city of culture’. 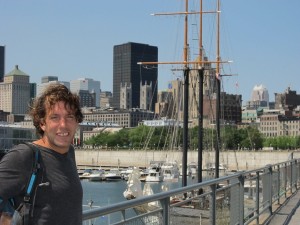 Yesterday we hired bikes and headed off to explore the rather faded jewels of the ’67 Expo, the Biosphere, Habitat ’67, L’homme (sculpture) and the Gilles-Villenueve F1 racing track. We bought lovely French style produce from Atwater market and had a pic-nic overlooking the city from Royal Mountain or Mont Real from where the city derives it’s name. 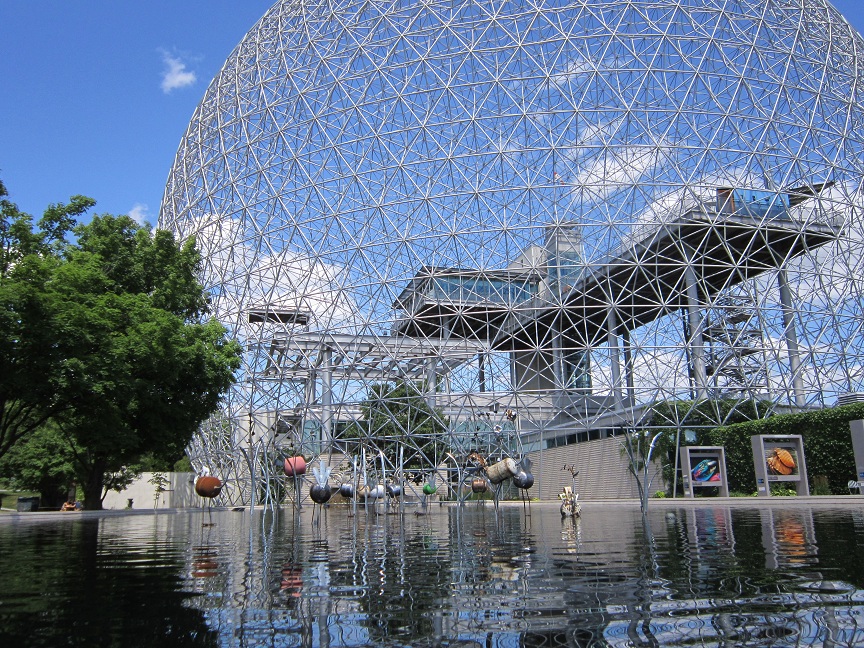