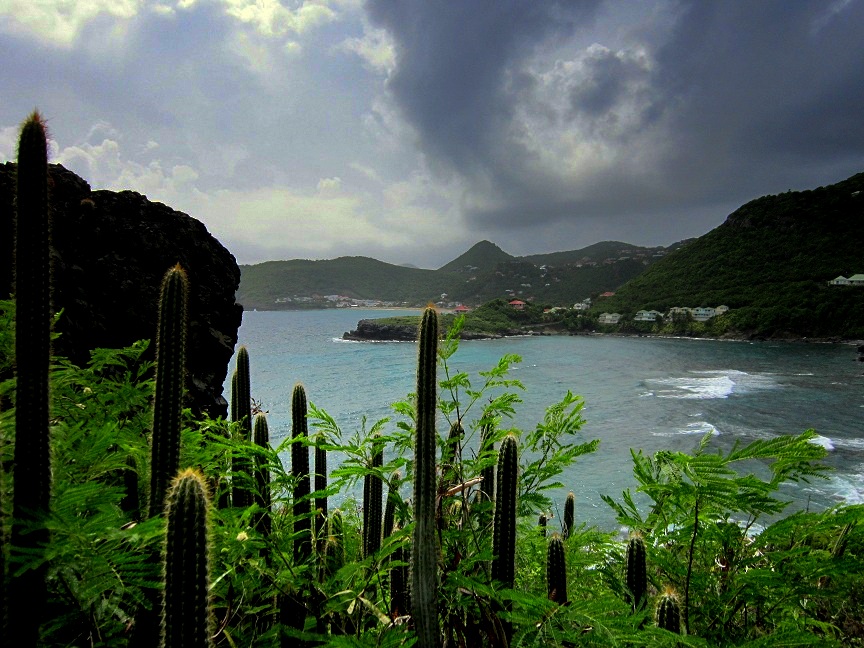 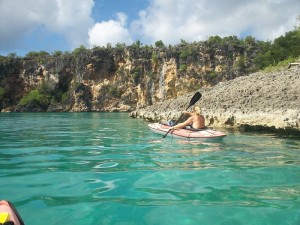 Anguilla got even better! We sailed around to the next bay – Crocus Bay, and anchored. We were the only yacht there with just a few fishing boats bobbing around in the lovely turquoise water. We blew up our new kayaks and strapped on our snorkels and paddled around to the marine park (Little Bay) which was a turquoise expanse of sparkling sea surrounded by beautifully patterned and coloured cliffs. The water was so clear you could see down to the bottom. After beaching our kayaks on a tiny beach we had a snorkel along the cliff edges where colourful fish and coral grew in abundance, gorgeous. 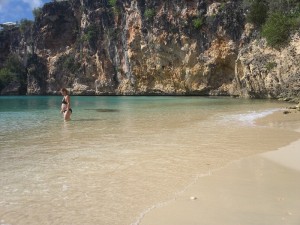 The next morning after a stroll into The Valley, Anguilla’s capital, to provision, we set sail to St.Barthelemy known as St.Barts. We’d heard some slightly damning reports about St.Barts, mainly that it was an over priced, pretentious, millionaires playground full of preppy, sloany types with more money than sense. But, as we have learnt, never take someone else’s opinion as read, always judge a place on its merits. 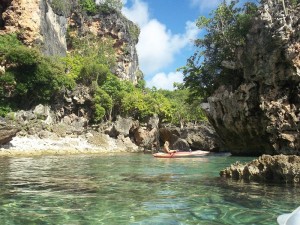 The sail was a rather rough and choppy affair, one which reminded me all too well of the bits that I don’t like about living on a boat, mainly sailing…. I hit a particularly low point as we sailed through the gap between Scrub Island and Anguilla. The wind was gusting, the boat was being roughly handled by an awkward swell and I felt sick as a dog. Then I managed to create an enormous knot in the fishing line as I pulled in the lure to check for weed. I hate knots and I felt so sick that I gave up and just put the end back in, which then became entangled in the dinghy engine arghh, utter irritation! And then I was violently sick, mostof which managed to land in the sea. Just as I sat there with tears in my eyes feeling despair at the knot I was going to have to tackle, the line jerked through my fingers in a most unusual manner. I looked at Jamie and said “did you just see the line?” I begrudgingly took over the steering (I usually chicken out when it’s that rough but the 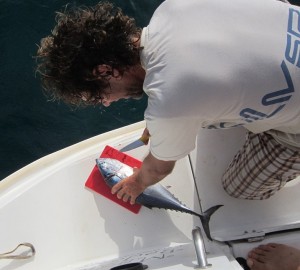 massive knot, dinghy tangle and potential fish haul made it seem a more tempting prospect than usual). Jamie, embarrassingly enough, undid the knot in a matter of seconds, unhooked the line from around the dingy and started to haul in the line. I was too excited as he said “mmm, I think there’s something on there…” to feel too scared about steering. And then we saw it! A lovely, gleaming silver fish firmly hooked on our blue over pink sparkly squid lure. Jamie had to haul it into the cockpit where it immediately became free of the hook and flapped around violently. The winch was grabbed and the poor fish gave up it’s life, very bloodily,  a surprising amount of force was needed to kill it. I was still too excited to even notice the splatters of blood all over my body and the cockpit or to worry about the drastically tilting boat. We identified it as a Caribe or more commonly Tunny. After this my spirits lifted and I didn’t hate sailing quite as much as I had half an hour earlier. 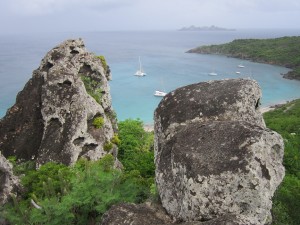 We took a mooring (marine park regulations) in Anse De Colombier, a beautiful wide bay with a gorgeous beach on the south west coast of St. Barts. The Tunny was gutted and some very generous steaks cut. We dighied over to the beach, lit a BBQ and ate some of the freshest and most gorgeous fish I’ve ever eaten. Even Jamie liked it. The flesh was dark red in colour, very similar to Tuna.

Our morning dawned in rather a grey, blowy and disappointing manner, so we decided that a walk on land would be the best use of the weather. We went for a beautiful circular walk with some gorgeous views. St.Barts is a very picturesque island and certainly seems to have a wealthy population if the houses we passed along the way were anything to go by. 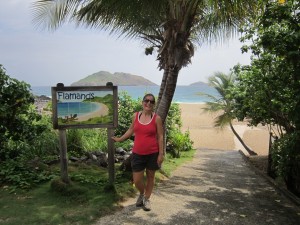 Back on the boat and some more snorkelling was enjoyed where we saw some types of fish we hadn’t seen before as well as squid, an eel and bright blue parrot fish. Unfortunately the underwater camera ran out of batteries half way through.

After lunch we had a short sail to Gustavia Port, the capital and we seem to have chanced upon another music festival. Our boat is in the harbour not more than one hundred feet from the main stage, it sounds like we have a band playing on the swim deck. We treated ourselves to a meal ashore which was lovely. Although there are many rich and beautiful people here we don’t feel too much like peasants, we both managed to scrub up quite well. I’m eagerly anticipating sniffing out the boulangerie in the morning in the search for croissants, hurrah for the French islands! And then I think we plan to sail to St.Kitts (again). I shall update you when we manage to find the ever elusive WIFI.