I’m writing this from a hole in the ground, but I’ll tell you more about that later… 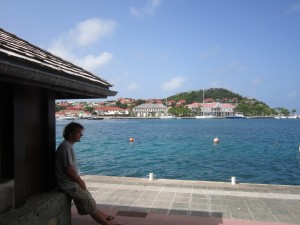 Our last day in St.Barts was spent, unfortunately, hunting for a replacement phone. Jamie’s smart phone died which caused us quite a few problems. Firstly, we were no longer able to carry something pocket sized to shore to get internet access and therefore, crucially, the weather reports. Secondly, we became un-contactable, something which the yard owner had specified that we should NOT be. Thirdly, we had no means of knowing the time, neither of us having a watch. This would make navigation more difficult.

Jamie on a Mission

All the phones, it transpired, were too expensive and so we scrutinised the weather while we still had WI-FI and decided that we were OK for another day. We purchased an alarm clock for the time which proved actually, to be astoundingly inaccurate when it came to timing the cooking of my rice… 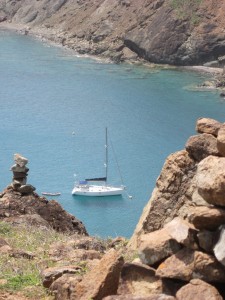 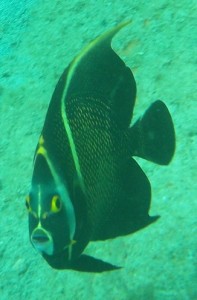 The next morning, a lovely, shining bright one, we sailed, just on the jib (actually it’s a Genoa but I’ve got jib stuck in my head after referring to it as this for months) to Ile Fourchue, a little rocky, uninhabited island, a few miles off the coast of St. Barts. It looked more like an island off Scotland as it had been decimated by a goats who ate themselves into extinction, however, it is starting to regrow in places.

We took a mooring ball as the coast is all part of a marine park and spent an utterly divine day firstly kayaking to visit the wreck of a catamaran on the rocks, then hiking up the hills on land followed by snorkelling on the rocks in the bay.

Whilst hiking we were met by a whole host of extremely inquisitive lizards. It was quite funny, we’d sat in a clearing to put our trainers on and heard all this rustling, then all these lizards started to appear. They weren’t at all afraid of us and one even climbed onto my foot and had a nibble of Jamie’s ankle. I presume that someone must have fed them at some point for them to be so bold. 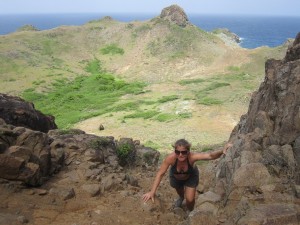 Unfortunately we felt compelled to return to smelly St.Martin the next day with a possible hurricane on the way and no internet to check the weather or phone to be contacted on. We sailed into Simpson Bay  and made our way to MacDonald’s for WI-FI. The weather looked decidedly dodgy and so we rang the guy who owns the yard into which we planned to haul and he said “get here now!”

After a rather rough sail around the coast we made the French bridge into Simpson Lagoon just in time. We were lucky to catch it as it was broken and they were only opening it manually once a day.  After anchoring outside the yard overnight we eventually managed to get a haul out the next afternoon. It was quite depressing and sad to see Magic Badger carted through the air and plonked into a hole in the ground. I think the grottiness of having to live in a dirty, muddy, mosquitoe riddled yard for the next 2 weeks and the sorrow that our sailing adventure is no more, has made us both feel rather blue. 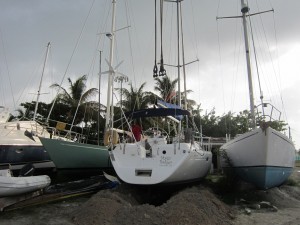 We have some work (there’s always work to do on a boat) to leave her looking spik and span for future owners. We hope to have some spare time left to catch the ferry to Saba which is where we planned to sail to before the weather forced us to return to St.Martin.

The last 24 hours have been spent in the Badger, in a hole, listening to the shrieks of  ‘tropical storm Isaac’ and, despite being a mere tropical storm instead of a hurricane, I’m still quite glad that we’re not anchored out in the bay because it sounds like it’d be pretty frightening.

2 Responses to A hole new experience